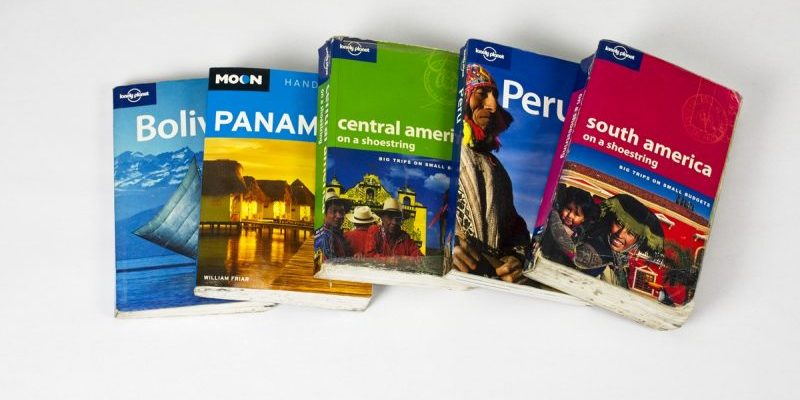 Back in the Day

I had to walk to and from grade school with my big bag of books – uphill both ways – even if it was snowing. A baked potato meant for my lunch kept my hands warm… well, one at a time anyway. So why would I bat an eye at carrying five pounds worth of guidebooks in my backpack while wandering through Central and South America? I didn’t.

Central America on a Shoestring, South America on a Shoestring (two hefty tomes, I’ll have you know), guidebooks for Guatemala, Nicaragua, Costa Rica, Ecuador, Peru… the ounces seemed trivial at first but added up in a hurry. And, weight was only a part of the issue, the physical volume consumed by the shedders-of-light-on-new-and-unfamiliar-lands was valuable real estate inside my backpack. As we traveled southward, and countries fell behind us one by one, I realized that all of the guidebooks weren’t needed all of the time and, surprisingly, they were available in English in many of the places visited. Again, this was many years ago, and email was still pretty cool, served up at an “internet cafe” or a hostel on a 286 (386 with a USB port if you were really lucky). If you can believe it, Facebook was in its infancy — just some pimply-faced college kids’ pet project. And so it followed that the main exchange of information for travelers back then was a book-exchange.

Since the olden days of travel, internet access has become just another utility that’s taken for granted in many parts of the world. The Kindle and other eReaders were introduced to take advantage of the near-constant connectivity, and almost any book is available at the snap of the fingers. It’s amazing, and a boon for travelers — information about foreign lands is available 24/7 and in an instant.

With the advent of eBooks and eReaders, traveling with one guidebook or 100 guidebooks requires the same amount of space and weight regardless of the number of books. The new eReaders are so compact that my husband and I each travel with one. Not only do we have the mandatory what-to-see-and-do books, but we have books to read for pleasure too. What a decadently mind-blowing improvement!

Additionally, not only are the eBooks in the eReader’s library weightless (of course I know that electrons have weight… wiseacre… relatively weightless), but they cost less than paperback books too. So there must be a trade-off, right? None that I can think of, other than the smell of printed paper and the sound of riffling through the entire deck of pages. The eReaders are just as easy to read in bright sunlight as a paper book and infinitely better to read in the dark since they now have backlighting. As if the advantages of an eReader over paperback books already mentioned aren’t enticing enough, the new Kindles are water-resistant. I’m going to go out on a limb here and suggest that they are also wine/beer/cocktail-resistant too. How could it get any better?

How can it possibly get better? Well, if you are an Amazon Prime subscriber, a large library of books is available to read for free. For example, both of the back-breaking continent-encompassing space-hogs mentioned above can be read for free (at the time of writing). This is probably a Prime perk you’d never heard of before. Contrary to popular belief, a Prime membership isn’t just useful for free and fast delivery. We kept our subscription while traveling for unlimited cloud storage for photos, on-demand streaming of television and movies, and free music too.

So, we have eliminated heavy books from our luggage, gained easy access to new books whenever there is an internet connection, and reduced the cost of the guidebooks. What else can we do to put the pains of the days-of-old —when visits to a foreign-language-speaking chiropractor were frequent — completely to rest? Well, we can make the guides crazy-cheap!

But aren’t books offered in the Prime library free? Yes, they are, and Amazon Prime offers some guidebooks… but not many. If you want a guidebook that’s not in the Prime library, one option is to buy the eBook. You’ll save a few bucks compared to the paperback price, though expect to pay roughly $15 each. That’s not bad, but if you are GlobeWandering it adds up. Heck, we’ve been to 45 or so countries and have met others who have been to more than 50 — even 60 — countries. Do that math… see what I mean about it adding up?

The best option is to subscribe to KindleUnlimited. It’s brilliant! KindleUnlimited gives access to a humongous library of eBooks — over one million titles — including numerous travel guides such as nearly all of the Lonely Planet guides. The service is $9.99 per month (less than a single eBook travel guide) and you can have 10 eBooks “checked out” at the same time. (FYI: You don’t need to be a Prime subscriber to take advantage of KindleUnlimited and you can cancel KindleUnlimited at any time.) Wow! Ten books for ten bucks!

Okay, now you are privy to some of our secrets for traveling on a budget, yet doing so comfortably. Travel guides are necessary but expensive and the paperback versions are bulky and heavy. You now know how to save big bucks and how to avoid the chiropractor, so don’t overspend and don’t break your back!

Obviously, the first book to put on your eReader is GlobeWandering on a Budget!

This post contains affiliate links, but they won’t hurt or leave a mark of any kind. These products are ones we really use and think others will find valuable.