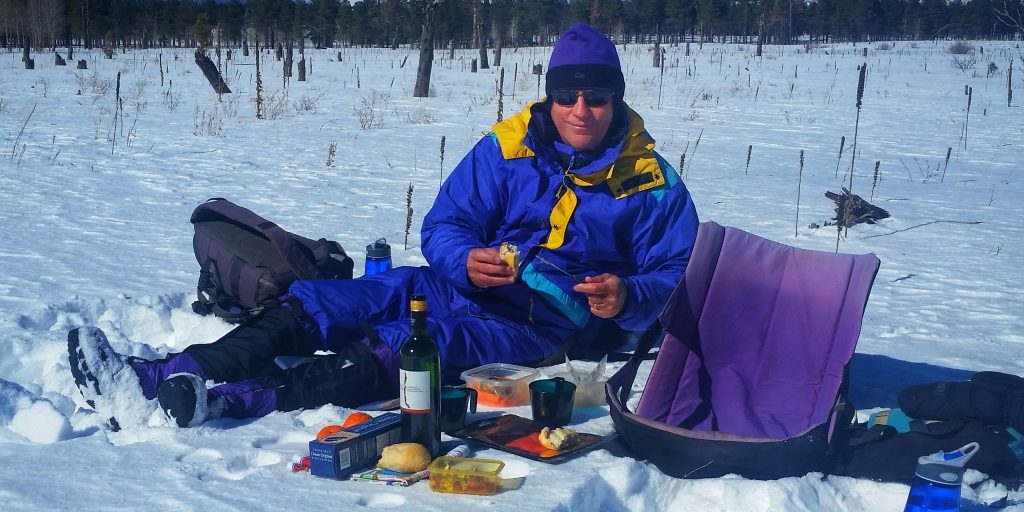 Do Snowshoes Have Bladders?

“With all of the rain we’ve gotten down here recently, Flagstaff must be buried in snow,” Pat surmised. “Let’s go snowshoeing.” Well, that’s a suggestion you don’t have to make twice. Before he finished his thought, I had the snacks ready to go, my play-in-the-snow base-clothes on, and a bottle of wine selected.

As we loaded up the car, the snowshoes watched from their semi-permanent perch on the garage wall. They hadn’t been out in the snow for years and watched on with their usual disinterest. When Pat approached them, though, they knew something was up. We’re going for a walk! If they’d had bladders, they would have let loose from the excitement. The snowshoes practically jumped off of the wall and into the back of the Subaru by themselves. I swear their bindings were wagging with overwhelming joy.

From the Valley to the Mountains

On our drive up to Flagstaff, it occurred to me that one of the most amazing things about Arizona is the diversity of climate that can be experienced in a single day. If you like, you can go skiing in the morning and then play a round of golf in the afternoon, it all depends on the elevation.

We had left our home (3,700′ and about 55F) — and the garage that the snowshoes considered their prison — and wound our way through Sedona (4,500′), up through Oak Creek Canyon (6,000′), and finally up the switchbacks to the top of the Mogollon Rim (7,000′). Hmmm, the thermometer reported a temperature quite a bit above freezing yet and we expected much more snow. That curbed the snowshoes’ enthusiasm. Not to worry though, we still had another 1,000′ of elevation gain to make.

We continued through Flagstaff, past the ski resort, and past the Nordic Center. As the elevation increased, the snow grew thicker. The snowshoes showed signs of interest again and dropped their sulking teenager-like demeanors. “We’re here!” exclaimed Pat, just 70mi and about an hour and a half from home.

Upon opening the car doors, the cold — but not too cold — air greeted us like a long lost friend. It was time to bundle up, shell pants, snow boots, gaiters, coat, and hat. Whew! The effort left me a little breathless. It could have been the elevation, or it might have been the struggle to get into some gear that probably fit better in years past.

After catching my breath, I trod out into the snow. The white stuff came up to only a few inches above my ankles, lower calf at best. I returned to the car where Pat was still panting and trying to reason with his gaiters. “I don’t think we’re going to need the S-N-O-W-S-H-O-E-S,” I whispered. He looked up, a bit disappointed, finished his negotiations with the gaiters and tramped out into the snow himself. “I think you’re right,” he said… a phrase I rarely hear. It’s recorded here forever now. I can read it when I please or use it as proof if need be. But, I digress.

Trying to make as little commotion as possible, I grabbed my daypack with the snacks and wine and put it on my back. Pat grabbed his daypack too, and we both tried to avoid eye contact with the snowshoes. Shutting the doors didn’t disturb them, but then Pat used the key fob, click-click-beep! That set them off. Being left behind in the car while we played in the snow was not what they were expecting and completely cruel and inhumane.

We walked away from the car knowing that we’d made the right decision while the snowshoes watched in disbelief and pressed their catgut noses against the rear window. With a twinge of remorse, we set off through the pristine powder in the direction of the 12,635′ snow-covered mountain in search of a nice spot with a view to eat and drink our VinoLunch.

After a couple of hours of walking a few miles in the beautiful snowy mountains, eating smoked salmon, fancy cheese, and other goodies, and washing it all down with a decent Cabernet Sauvignon, we headed back to the car. Oh geez, what are we in for? Did they tear the headrests to shreds?

No, the headrests were intact. In fact, the snowshoes gave us the silent treatment. They lay in the back of the car like inanimate objects. We heard not a single peep or whimper as we peeled off our outer layers nor as we descended back into the valley. It was deafeningly quiet.

Upon arriving back home, we unloaded the car. Pat took the snowshoes out last and hung them on their pegs one-by-one. Again, not a peep or whimper. We were disappointed that we didn’t get to snowshoe, but any day spent in the wonders of nature is a good day in my book. When the next snow storm rolls through, we’ll give it another shot and hopefully get the snowshoes in the snow.