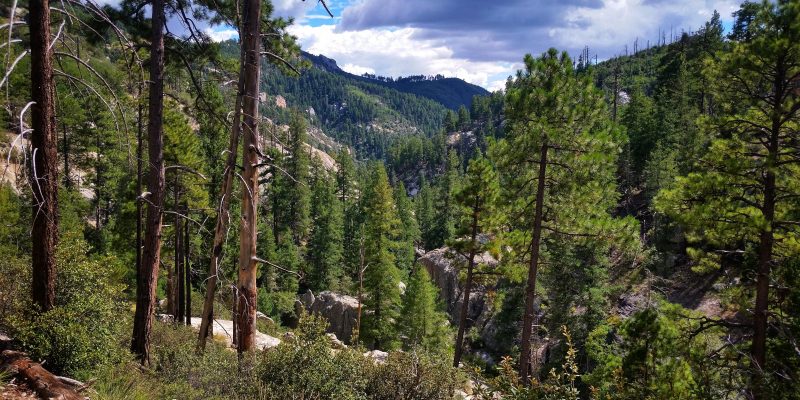 Hot in the City

It wasn’t a dark highway, but it was most definitely a desert one. Saguaro cacti stood with their arms reaching toward the sky asking for rain or absolution, or whatever cacti ask for. They populated the area as far as the eye could see. No cool wind was in anyone’s hair, mainly because by choice or by genetics, none of us had much hair. Also, it was too darn hot in the bowels of Tucson, so the windows were up and the car’s A/C was struggling to keep us comfortable. Admittedly, none of us had any clue what “colitas” was anyway, so we’ll just end the Eagles reference right here.

Tucsonans know that when the heat is on, the best course of action is to get high. Not that way… changing elevation as quickly and as drastically as possible is the preferred method. In under an hour, it’s possible to go from the desert floor at around 2,400’ to a cool pine forest at 8,000’. Of course, you will recall from school, that the temperature decreases approximately 5F for every 1,000’ of elevation gained, knocking nearly 30F off the toasty Tucson temperature. My brother, Pat, and I were thirsting for a VinoHike, so up, up, up we went into the Santa Catalina mountains near Tucson. Our 15-year-old “green station wagon,” a Subaru Forester named Butch, hauled our carcasses, snacks, and a couple bottles of wine out of the stifling desert heat and into the cool, shady forest thousands of feet above us.

People on ‘ludes Should Not Drive

Okay, the “green station wagon” story is kind of interesting in a somewhat terrifying way. On our way down to Tucson to visit our family, we wound up behind a big, old, sedan — the kind that is often likened to a boat — on I-10. Anyway, the driver was clearly not paying attention, or impaired, or asleep at the wheel. The car kept drifting from the dotted white line to the solid yellow line in an erratic manner. We gave the vehicle a little extra distance and let another brave soul go ahead of us. Shortly after that brave vehicle passed us, the big white boat veered onto, then off of, the shoulder at 75mph or so into the median, skidding a little out of control and kicking up dirt, but miraculously, it found its way back onto the highway.

Immediately, we called 9-1-1 and reported the impaired-texting-sleeping driver. After maybe 20-minutes on the phone with the DPS dispatcher, we were asked to put our hazard lights on and report our position so that the highway patrol officer could identify our car and then gauge where the suspect driver was. Obviously, we did as instructed and shortly afterward saw the highway patrol vehicle pass us at a high rate of speed. That’s when the DPS dispatch person asked if we were in a “green station wagon.” Lol. Butch considers herself to be much more of an SUV than a station wagon. Her feelings were a bit hurt, but she felt much better when only a few minutes later, we saw that the big white boat had been pulled over. Apparently, the pilot’s driving skills had not improved.

On a Happier, Less Frightening,  Note…

Back to the VinoHike… Mt. Lemmon in the Santa Catalina mountain range is a great escape from the desert heat and the noise of the city. My brother guided us to the Marshall Gulch trailhead where we set off on our quest for a nice shady spot to have our VinoLunch. It wasn’t far to his favorite spot, but it offered no shade, so on we hiked. Soon thereafter, we came across a woman heading the opposite direction and asked if she’d noticed a suitable picnic spot. She said that she had not, and was in fact, looking for an off-the-trail spot for other concerns.

We continued along the trail, but eventually gave up since what lay ahead of us appeared to offer no shade nor a flat place to sit. I mean, it may be noticeably cooler than Tucson up there, but my brother’s — and consequently, my — Lithuanian-Danish-Irish-French (northern, undoubtedly) heritage, meant that only a plaster-thick coating of sunscreen would prevent us from burning to a crisp under the intense Arizona sun.

Backtracking, we found a shady spot we had noticed before, and the woman we had met was sitting on a rock, resting there. We didn’t inquire as to whether or not her concerns had been met, but hoped if so, that they were met a fair distance from the trail. Asking if she’d mind sharing the shade, she welcomed us to take a seat. Her eyes kept growing larger as we first pulled out our Crazy Creek chairs and plopped our behinds into the comfortable seats. Next, my brother set up his portable aluminum ankle-high table which we properly covered with our Italian dish towel — the towel would still be well served by a washing — then we loaded the table with chicken, veggie sushi, and other snacks. When the wine appeared, she declared that we were her kind of people.

It turned out that she was a botanist, and involved with a non-profit called Sky Island Alliance. We spent an interesting twenty minutes or more talking with her and learned that her group of volunteers does all kinds of nature conservancy activities, mainly in the Southern Arizona area. Before I forget, yes, we did offer her wine, but she was out on the hike to “dry out” a bit. You meet all kinds of interesting people… everywhere. Sometimes we forget to write about those in our own backyard.

We relaxed, as the nightman in the Eagles’ song suggested, and enjoyed a refreshingly cool afternoon out of doors. Our encounter with the botanist was an interesting interlude. And, as the song goes, we could check out any time that we liked… but we didn’t necessarily want to leave.

6 thoughts on “Tucson, AZ: When Life Gives You Lemmons…”