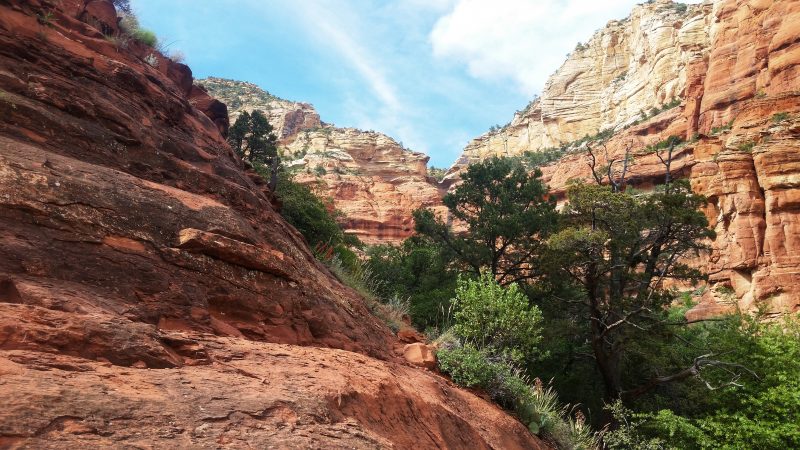 As many of you know we’ve been planning a much-ballyhooed multi-month road trip and you’re probably thinking, why are they in Sedona? Aren’t they supposed to be bopping down some little-known lane in the steamy southern portions of the massive and nuanced country that they call home? By this time, shouldn’t they be loosening their belts a notch or two to accommodate the “souvenirs” of Hatch green chili, Texas BBQ, and oyster po’ boys? Photos of Carlsbad Caverns, Big Bend, and the Big Easy should be flooding their social media feeds. So what happened? What gives? Well, as is said of the best-laid plans, they went awry.

For those of you who may be expecting us to show up on your doorstep unannounced, rest easy. We’d never do that by the way, but you can stop cooking up excuses to avoid our visit and you can open the drapes. When we do eventually embark on this grand voyage, we’ll give each of you ample time to drum up a sick cousin or a can’t-miss anniversary or whatever… and to draw the curtains.

So this is why we’ve delayed our departure, Pat’s been working through some medical issues during the past few months that we seriously believed would have been diagnosed and resolved by now. As is his way, he likes to give people a challenge. I told him that he really shouldn’t taunt the doctors, but will he listen? Suffice it to say, he’s still befuddling the docs.

It can always be worse, right? A few of the people we had hoped to see on the road trip have far greater health challenges. Though Pat’s not himself, he can still enjoy normal activities, just at a much dialed-down level. Also, it’s not like we’re “stuck” in Clarkdale. We love this part of the country and pinch ourselves every day that we are lucky enough to live here… when we’re here.

On the Beaten Path

Yesterday was a “good” day, so we decided to take a VinoHike. Fay Canyon in Sedona was just the ticket for a not-too-challenging, but pretty hike. Actually, I should say that we chose to do the generally accepted version of this hike. You know, stopping where the sign said the trail ended. Normally, we’d bushwhack another mile or two into the box canyon and sit on a well-positioned and lightly-frequented ledge to admire the fascinating rock formations and changing light. But yesterday, when we reached the “End of Maintained Trail” sign about a mile into the canyon, we quickly found a spot on the rocks to park our fannies and pop the cork.

Immediately, other hikers trod by, quite a change from our remote ledge in the back of the canyon. Everyone was friendly… and envious of our “chairs,” snacks, and wine. A couple on vacation from Seattle stopped to chat for a moment and even snapped a photo for us. It’s rare that we think to take photos of ourselves.

Then, not a couple of sips later, a group of four arrived. They were from Poland and touring the Southwest for three weeks. We chatted with them for quite a while and learned that the prior day they had gone to the bottom of the Grand Canyon and out again. Whew! That’s a big hike. Also, they told us about the mountains in Poland and the Polish beer and vodka. We vowed that one day we’d explore Poland, as we’ve only seen the Warsaw airport to date and hadn’t had the opportunity to taste their libations.

Bring the “Locals” to Us

We are stuck in a holding pattern and unable to reach our secret places where we normally go to avoid the tourists. Maybe we’ve been doing this all wrong. Our hike yesterday was a wonderful experience. As you know, we enjoy traveling to foreign lands to meet the locals, and since we’re unable to travel right now, maybe it’s a good thing to let the tourists — the locals from another place — come to us.

6 thoughts on “Sedona, Arizona: Making Friends in the Red Rocks”