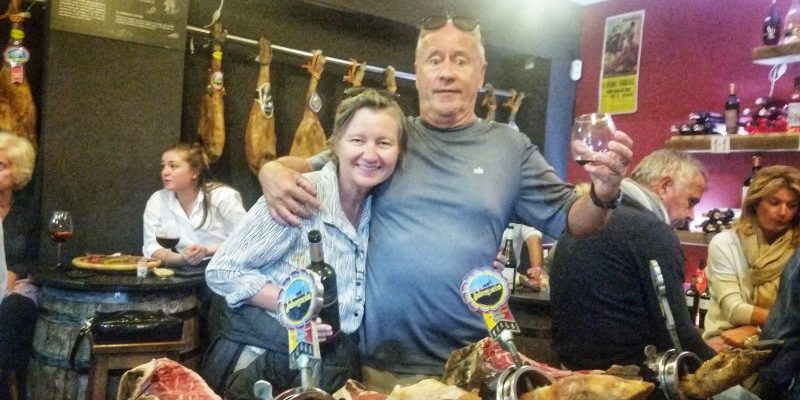 Our time in Europe was growing ever so short. We had one week left before we needed to be in Barcelona to catch the cruise ship to Florida. Last year we spent a month in Perpignan and made friends that we were anxious to see again. Perpignan just happened to be on the way to Barcelona, so we decided to spend the whole week there. At least that is what we thought…

We found an Airbnb in Perpignan directly across the little lane from our friend. How perfect is that? Our host was a very friendly woman who was also friends with our friend. The apartment was spacious and immaculate with a well appointed kitchen. We knew where the butcher, fruit and veggie market, boulangerie, and Hyper Marche were. All was well. It was like coming home.

Our friend, Karine, was busy the first couple of days we were in town, so we set off provisioning for the week and exploring places we had been the year before. One of our favorite places is Collioure. It’s a beautiful little town on the shores of the Mediterranean noted for its anchovies. I guess it is tradition now, because both times we visited Collioure, we picked up a jar of anchovies in oil and vinegar, a baguette, a little fruit, and a bottle of wine from the co-op to make a wonderful VinoLunch.

So far, everything was normal.

Then the Cow Showed Up

The next morning Karine texted to say she was coming over. Yay! We were finally going to be reunited! She doesn’t speak English, just French, Catalan, and a bit of Spanish. My French is miserable but my Spanish is somewhat plausible. I was looking forward to our conversations in horribly mutilated Spanish and charades. Thankfully Pat is fluent in French, so they talk about important things in French and when she and I get stumped, Pat helps us along.

The doorbell rang and what presented itself at our door was a cow! Well, not a real cow. It was Karine in one-piece pajamas that looked like a cow. We had a good laugh then got busy mangling Spanish, mixing in French and English and getting caught up on the past year’s events. It was a blur of hugs and kisses and stories.

Just before Karine left she invited us to go to Roses, Spain for the weekend to see Marie, another friend we made last time we were in Perpignan. She has a beautiful apartment overlooking the Med and we were all welcome for a couple of nights. Well, sure! Why not? Karine even gave Pat a haircut so he’d look nice for Marie… and for us too I suppose.

Beware of cows persuading you to leave the country with them, even if they give your husband a much needed haircut.

Get in the Car

Karine’s old Peugeot is affectionately known as the French Porsche. It’s a little old grey tin can in full Catalan regalia; Catalan flag, Catalan stickers, Catalan colored ribbons… “Monte dans la voiture,” she said. I knew what that meant. That meant, “Get in the car.” She said it nicely, so we suspected nothing. This is how most kidnappings happen. A relative, or someone you know and trust, just takes you. We jumped into the car like dogs after hearing Who wants to go for a walk? If we had tails they’d be wagging.

The hour and a half drive from Perpignan, France to Roses, Spain took much less than that. The little grey car must have been testing its limits because it made noises that were almost human and clearly indicated pain. We arrived at Marie’s in one piece and the French Porsche did too. Pat and I kissed the ground when we disembarked.

Marie was just as cheerful as we recalled. Hugs, kisses, wine, and chatting. Her apartment was beautiful, set up on the mountainside just above the Med with a to-die-for view. She prepared a sumptuous feast that we ate on the balcony while watching the setting sun. More wine, more chatting, a little brandy then off to bed we went. Life was grand and we still suspected nothing.

Goin’ to the Shah-pel and we’re gonna get…

We woke to the smell of coffee and made our way out to the balcony. Karine and Marie were already sipping on steaming mugs and enjoying the view. Knowing what I know now, they were probably busy plotting. Toast and jam were brought out. Once breakfast was complete, it was time to get moving. Marie suggested that we take a walk along sea. It was a beautiful day so we readily agreed.

The walk along the coast was beautiful and the day warmed up nicely. It didn’t feel like a forced march at all. Karine and Marie were up to something though. Marie turned around and said that since it was Sunday morning, we were going to the shah-pel. It sounded like the comedian Dave Chappelle’s last name. They giggled. Pat and I looked at each other and shrugged. The march continued. I think it was at that moment we realized we had been kidnapped.

They stopped in front of a taberna and announced that we had arrived at the first shah-pel. Pat and I gave them a quizzical look. Marie said insistently, “Shah-pel! Shah-pel!” She made the sign of the cross and clasped her hands together in mock prayer. “Oh! Chapel!” Pat and I finally realized. This is where they started to force their will upon us.

Four cañas (small beers) were placed on the table with a dish of nibbles. We were instructed to drink the beer and eat some nibbles. Our will was no longer our own. They were firmly in control now. After we finished, we were marched to another “chapel” and the process was repeated.

Maybe praying would have been a good option at this point.

Karine and Marie took us for a walk to the marina where we looked at the mega-yachts. They fought over which one they would buy. It didn’t occur to me then, but that was probably our ransom money they were spending. Anyway, it was all just a diversion to get us to the next “chapel” where they had something a little diabolical in mind.

Marie did the ordering. A glass of wine was set in front of her and a beer in front of Karine. Pat and I were served large fishbowls of brightly colored liquid with fruit in it and on it. It was pretty and we were up to the task. The two little beers we imbibed earlier had already been recommitted to the Spanish aquifer.

Marie proclaimed that these were the best Sangrias in Spain. We didn’t even have to pretend that they were really good to appease our captors. They were really good! What we didn’t realize at the time was just how fortified they were. We relaxed a bit and joined in multilingual conversations with another couple and a group of young men. When we left the “chapel”, the couple joined us.

They called in the back ups.

Tiptoe through the Tapas

We must have been presenting our abductors some problems, because now we were guarded by four people. It was early in the evening and time for tapas. They guided us to a cool little tapas place with wine barrels and stools on the sidewalk. We sat down as instructed. We were outnumbered. An escape would be dicey at best. Besides, we were hungry too.

Plates of tapas started to fill the top of the wine barrel and a jug of wine started to fill our glasses. There were patatas bravas, fried padron peppers, mussels, croquetas de jamón, fried calamari with garlic aioli and more. Tapas are so much fun because you get to have small tastes of a lot of different dishes especially if you are there with a group of friends… or kidnappers.

The tapas slowly disappeared and the plates of food and jugs of wine stopped coming. We were full and happy and nearly forgot our predicament. That’s when they called in an accomplice.

The owner of the tapas bar claimed it was his birthday. A ruse, no doubt, to inflict an evil green liquor upon us called l’herb. He poured it from a five gallon jerrycan. It’s safe. Trust me. But very strong. Be careful. Everyone at the table had a shot, but the owner sipped a colorless liquid instead. Hmmm… He poured us another. We toasted his birthday again.

The rest of the night was reconstructed from photos on my phone, Pat’s camera, and our kidnappers’ phones. We have no idea who took the photos since at times all of us were in them. I remember walking through the streets of Roses with a strange green shimmering halo at the periphery of my vision. There must have been more to l’herb than advertised.

The photos indicated that our captors made us make yet another stop. This time for paper thin slices of Spanish ham. There was even more wine in the photos. The ham looked amazing, but I can’t recall actually eating any. The kidnappers had won, but they weren’t out of the woods. L’herb must have affected them too, because we became separated.

Pat and I stumbled around the now quiet streets but could not find our abductors. We thought about a taxi, but had no idea what Marie’s address might be, nor even the name of her neighborhood. We were determined to walk back and retrace our steps, quite a few miles. After walking this way and that, looking for familiar landmarks, we sat down on a bench. Nous sommes perdus. We discussed whether to give up and find a place for the night.

Just as we were about to get up, presuming we could, and look for a room in town, Marie and Karine showed up. We were so happy to see them. I had to fight back tears of joy. We threw our arms around them then jumped into the car. “How did you find us?!” We asked. They said, “Well, you only made it half a block. It wasn’t too difficult.”

Back at Marie’s we fell into bed and slept the sleep of the dead. I know that for a fact, because the next morning I may as well have been dead. We were happy to smell coffee. A sure sign that our kidnappers were alive. They poured us coffee and made us toast. After an hour or two of recovery, Marie suggested a walk along the sea… to a shah-pel…

Being kidnapped in a foreign land can happen to anyone. Take our story as an example. Know the warning signs; friends dressed in cow’s clothing, going to chapels shaped like bars, friends ordering high-octane drinks for you, etc..  Do not resist your captors though. They hold all the cards.  And, whatever you do, Do. Not. Drink. The green stuff!

3 thoughts on “Perpignan, France: What to Do If You Are Kidnapped”