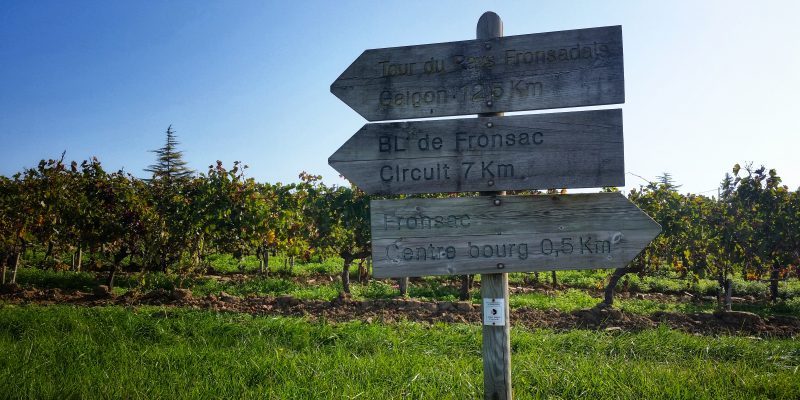 No proper wine romp through France would be complete without a stop in Bordeaux. It’s a mecca for wine drinkers and certainly recognizable by abstainers. In preparation for our assault on the fine vintners of the region, Pat did some googling. “Did you know that there are 38 sub-regions in Bordeaux?” he asked me. “Thirty-eight?” I said in disbelief. We only planned one week in Bordeaux. I did the math in my head. “That would be at least five sub-regions per day!” Obviously, some of the sub-regions would have to go un-tasted. It was a sobering realization. “Don’t panic,” Pat said. “I have a plan.”

It was a good plan. We would focus on the regions that primarily make red wine. When you think of Bordeaux, you think of red wine, but they make white and rosé too. There are even some sub-regions that make sweet white wines. By sticking to the reds, we could focus our efforts.

The drive from Lyon to our wonderful Airbnb in Bordeaux was a long one and an expensive one. We opted for the toll road to make it only a five-hour drive but paid almost $60 for the convenience. Ouch! That’s a few nice bottles of wine we won’t be having. Oh well, you live and you learn.

The directions given to us by our Airbnb host were to pull into town and her place would be the one across the street from the bakery, number seven. That sounded easy.

We arrived in Fronsac and drove through on the main street. It was a tiny town. We didn’t see the bakery. We drove back the way we came and looked again. No bakery. Pat asked for directions to the bakery and drove to it. It wasn’t on the main road and there was no number seven nearby. Nous sommes perdus again.

Known for its Cabernet Sauvignon and located between the Atlantic Ocean and Gironde Estuary, Médoc sits on a large peninsula. I plugged the Dunes Nature Reserve into Google Maps and carefully checked the option to avoid toll roads. Our coin needed to be saved for wine. We packed a VinoLunch and headed toward the coast.

The topography changed as soon as we crossed over to the “Left Bank”. It was heavily wooded, flat, and was a bit reminiscent of Northern California. I thought we’d have views of the coastline from afar, but the trees hid it until we were directly on top of the beach. It was a beautiful warm day. We sat on a bench overlooking the beach and observed the surfers and sunbathers, well, Pat paid attention to the sunbathers…

We nibbled and sipped our VinoLunch. There was no hurry since it was mid-day and French siesta time. It was perfectly relaxing. In fact, I’m getting relaxed just writing about it. But like all good things, the wine and nosh came to an end. That was our cue to go in search of the fine chateaus and their bottled Médoc magic.

There was no real plan, just a bunch of stars on Google Maps that marked chateaus that might have wine tastings. We cut across the peninsula toward the estuary. The trees gave way to vineyard after vineyard and grand chateau after grand chateau.

We pulled up to one palatial chateau and parked in front of a sunny room with a “Dégustation” sign on the door. There was no one there and the door was locked. We were the only car in the lot. As we got back into the car, a window upstairs opened and we were instructed to go up there. Cool! Finally a taste of Médoc wine. Well, that’s what we thought anyway.

We entered the upstairs room and it was a business office. The woman who called down from the window was on the phone. My French isn’t very good, but I heard some very large numbers followed by “euro.” She motioned for us to sit down. I think she thought we were there to order cases of wine. After a few minutes of listening to her on the phone, we smiled, waved, and took our leave.

The next chateau looked a little livelier. There were cars in the parking lot and a small building with a sign indicating wine tasting. That’s better! We walked in, and again, it looked like a business office. What are these people trying to do? Sell wine???

We inquired about a tasting. The woman asked if we had an appointment. I felt like we were striking out, but she showed us into a very small tasting room and sent a woman with a cold to pour us some samples. She was pleasant and knowledgeable despite her malady. We weren’t knocked out by the wine but felt obligated to buy a couple of bottles. We did, then abandoned our search for tastings in Médoc.

We had much better luck in Fronsac. Part of the reason is that Fronsac is quite a bit smaller than Médoc. But the real reason was La Maison des Vins. La Maison des Vins is basically a wine store with all of the wines from the chateaus in the sub-region represented. Bingo!

The woman who ran the store had been doing it for thirty or maybe ninety years, it was divisible by three anyway and she really knew her stuff. We tasted a few of the wines and honestly have to say that we preferred them to the one Médoc winery we tasted. Throughout France when we have been able to find wine stores that specialize in the wines from the local area, we have been pleasantly surprised with the information and the tastings.

But wait. There’s more. As an added bonus, a hiking trail starts from very near the wine store’s parking lot. That is right in our wheelhouse! It was a very nice walk up and down the vineyard covered hills and past the fancy chateaus surveying their estates. We liked the walk so much we rescued bottles from the wine store and took them on the hike with us twice while we were in Bordeaux. They never made it back alive though… can’t imagine what happened.

Just a stone’s throw from Fronsac is Saint-Émilion. We were constantly asked by our host — and just about anyone else we came in contact with — if we had been to Saint-Émilion yet. There was no not going. It is the darling of Bordeaux.

We arrived in the quaint little old town situated in the nook between a couple of hills and up their sides just before the mid-day cessation of activity. Having learned from our prior experiences, we sought out the wine shop that doubled as the tourist information office.

The man in the shop told us about the wines and helped us pick a couple of bottles aligned with our palate. The main grapes were Merlot, Cabernet Franc, Cabernet Sauvignon, Malbec, and Petit Verdot. These are a few of my favorite things.

The shop closed up on our heels so we took to ambling through the narrow cobblestone chemins. We passed fancy wine shops selling library selections for thousands of dollars, restaurants with foie gras on the menu, and high-end jewelry and clothing shops. Tourists were everywhere. It was quite a different experience from laid back and non-touristy Fronsac.

At the top of the hill, we found a stone picnic table overlooking the old stone buildings of Saint-Émilion below. It was the perfect spot for a VinoLunch so we sat down and enjoyed our snacks and a fabulous bottle of Saint-Émilion Merlot-Cabernet Franc. Be mindful, these wines can take a while to open. We did the old pour it back and forth between glasses a few times to aerate and it worked out perfectly. A good day was had by all.

These are just a few of the things we did during our week in Bordeaux, but I fear the reader grows weary. There is so much more to see and taste and hike. Bordeaux is not boring at all and we will be back!