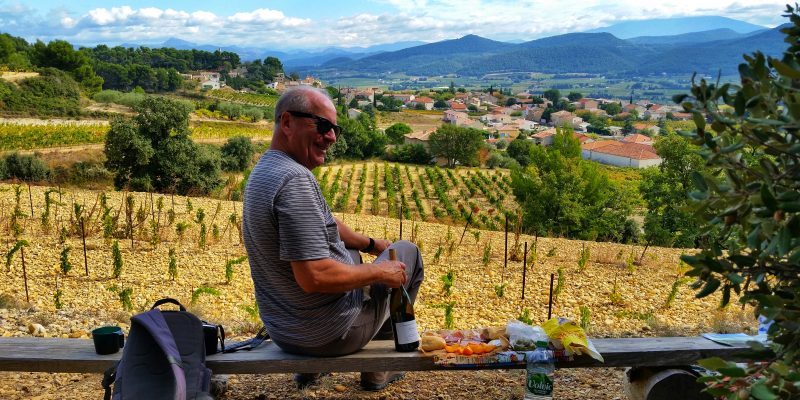 The day finally arrived. The Great French Wine Binge was about to begin. Four weeks of toodling about in the French countryside. Visions of vineyard cloaked hills and tasty tipples danced in our heads. We were ready and more than willing. First stop, a week in Côtes du Rhône.

Getting from Point A to Point B

Point A was Montpellier and Point B, Sauveterre, the location of our week-long Airbnb Bungalow in Côtes du Rhône. “How long of a drive is it?” asked Pat. It was our first real outing with the rental car. “How long do you want it to be?” I asked. You see, Sauveterre is only an hour and ten minutes from Montpellier if you take the A9 toll road, but where is the fun in that?

I took a look at the Google Maps satellite imagery.  “Let’s go north and see what happens,” I said. North wasn’t a crazy suggestion as our destination was to the northeast. I picked green areas with squiggly roads. They are usually scenic with little traffic. Google determined the sketched out route I had plotted would take about three hours. Perfect.

The French countryside was everything we imagined and more. It didn’t take long to become surrounded by vineyards. It was a beautiful fall day and the leaves on the vines were turning gold and orange and red. Tiny, quiet villages dotted our route. We stopped in one, Mauressargues, and had our VinoLunch before setting off toward our home for the next week. It was a very relaxing way to begin the Great French Wine Binge.

Smitten with the Kittens

The kitten of the house welcomed us to the bungalow in the very small village of Sauveterre, a stone’s throw from the Rhone. She seemed to know that wine and pretty villages were our desire as there were tourist information brochures about both on the table for us. She curled up on the couch to make sure we settled in okay then demanded lap time before leaving to go about her business.

The ambassador kitten had two brothers who joined us for cocktail hour in the afternoons. Really, we don’t start drinking at breakfast time… except on Sunday… but it’s more of a brunch… The two boys and the girl took turns on our laps and infiltrating the bungalow to knock things over.

It became impossible to make dinner with the window or door open, as one to three kittens would get into the bungalow and cause all manner of mischief. The little girl was the worst, and food made her crazy. Her brothers would just roll their eyes at her when she went into her gimme-food frenzy. Kitten claws are sharp by the way.

In Search of Chêne Bleu

Time to find some Côtes du Rhône wine! I somewhat randomly selected the Chêne Bleu Winery as our first destination. The reviews on Google Maps were good and it sounded like a nice property.  I contacted them through their Facebook page and made sure they were open for tastings and what days and hours. It’s complicated in France. Most places close mid-day for two, sometimes three, hours. Many close all day on Sunday. Some close Monday and it isn’t surprising to find places closed on other days too. Never assume anything is open.

We pointed the Ford in the direction of the Vaison Ventoux region and engaged the Google Bitch. We zipped over the Rhone to the eastern side then made our way to the foothills. We passed Sablet, a cute little village that coils up a hill.  Then we passed Séguret named one of the “most beautiful villages in France.” No time to stop, wine was calling.

The roads that the G-bitch directed us to take became increasingly smaller until we hit a dead end. We back-tracked and turned in the general direction of the winery. The G-bitch re-routed. Okay. Now she’s got it! No, she didn’t. We wound up on another dwindling road cutting through the vineyards that eventually went nowhere.

Nous Sommes Perdus! (We Are Lost!)

Sablet was the nearest village so we went back there to see if we could get directions. The tourist info office was just about to close for the mid-day siesta, or whatever they call it in France, but we caught the woman and asked about Chêne Bleu Winery. She looked at us quizzically and then basically said, “You can’t get there from here.” I hate when that happens. She told us to come back at 3pm when the office reopened. Turns out, the tourist information office was a wine tasting room. I love when that happens!

Obediently, we went away for two hours and found a park for our VinoLunch. We took a walk through Sablet. The village spiraled up the hill to the church. At exactly 3pm, we were back at the tourist information office. There were so many wines open for tasting we didn’t know which ones to sample. The main grape in Côtes du Rhône is Grenache but Syrah is grown too and others to a lesser extent. A complex set of rules governs what percentages of which grapes can be used in a Côtes du Rhône AOC wine.

The tasting and information were fabulous. We were disappointed we never found Chêne Bleu, but we were ecstatic to learn that tourist information offices in the Vaison Ventoux region were also tasting rooms.

Highlights from the Week in Côtes du Rhône

It was a jam-packed week. We had great weather and explored the region and its wines to the best of our ability. I don’t want this post to turn into the run-on monster it is shaping up to be, so I’ll briefly mention a few more of our favorite stops.

Rasteau is in the Vaison Ventoux region, not very far from Sablet. It also boasted a “Tourist Information” office. We knew what that meant. The office was nice and had a few bottles open for tasting. It is amazing how sometimes such a short distance can have such a large impact on the wine. The wines in Sablet packed some tannins. These were softer, fruitier.

A very nice feature in Rasteau is the self-guided tour through the vineyards. After we bought our bottle of wine, the tourist info woman gave us a map and instructions on how to find the trailhead. We grabbed our picnic materials and hit the loop.

The path rolls through the vineyards on the hills. Every now and then there is a sign with information about the wines or the soil or the weather. It was all in French, but we figured out enough to understand what they were saying. There was also a nice spot for our VinoLunch overlooking the vines. I wonder if we were looking at the home of the grapes in our bottle. It’s not a long hike. We highly recommend it.

The granddaddy of them all. When people think French wine, they think Chateauneuf du Pape. We stopped into the La Celestiere winery in the Chateaunef du Pape AOC for a little wine tasting. The wines were deep, amazingly well-balanced, and amazingly high in alcohol, 15%! You’d think it would come off hot, but they were smooth as silk.  We splurged and bought three bottles then quickly left the area. With name recognition comes hefty price tags.

If rosé is your thing, the Tavel AOC on the west side of the Rhone is the place to be. The main grapes are Grenache and Cinsault so the wines come off more like a red than your typical rosé. They actually have tannins.

Just north of Tavel and right across the Rhone from Chateauneuf du Pape lies Lirac. We accidentally wound up there one day when we had to scrap our plans due to a bridge being closed. What a happy detour! At Les Vignerons de Roquemaure we were able to taste wines from multiple wine makers. The soil must not be too different from the hallowed grounds of Chateauneuf, because the wines were excellent. The really excellent part is that they are much more affordable than the wines across the river and some can be purchased by the liter, just bring your own refillable vessel.

Another highlight was the spectacular scenery. We took a day to make the drive around Mont Ventoux and stopped at a few villages along the way. We finally visited Séguret, “one of the most beautiful villages in France.” It was tiny and cute with narrow cobblestone streets. Vaison-la-Romaine offered a cool fortified old section on a hill. Brantes clung to the side of a mountain like the she-kitten clung to my leg when I had food. Many cyclists follow this route, so if you are a cyclist, this is a beautiful area for a ride.

The week in Côtes du Rhône was fabulous. The countryside was beautiful. The wines were amazing. We did a pretty good job of exploring, but there is so much more to see. A week was good. Two would have been better. Longer wouldn’t hurt either.